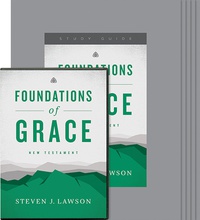 This adult Bible study class is starting a new 14-week study on Sunday, February 17.  They will be using the video series called, Foundations of Grace, by Dr. Steven Lawson.

The doctrines of grace are not a sixteenth-century invention.  They are God's doctrines, revealed in His Word, rooted in eternity past, and accomplished in history.  In the two-part series Foundations of Grace, Dr. Steven J. Lawson surveys the entire Bible to demonstrate that salvation is the work of the Father, Son, and Holy Spirit from beginning to end.  The class will begin with the Old Testament.